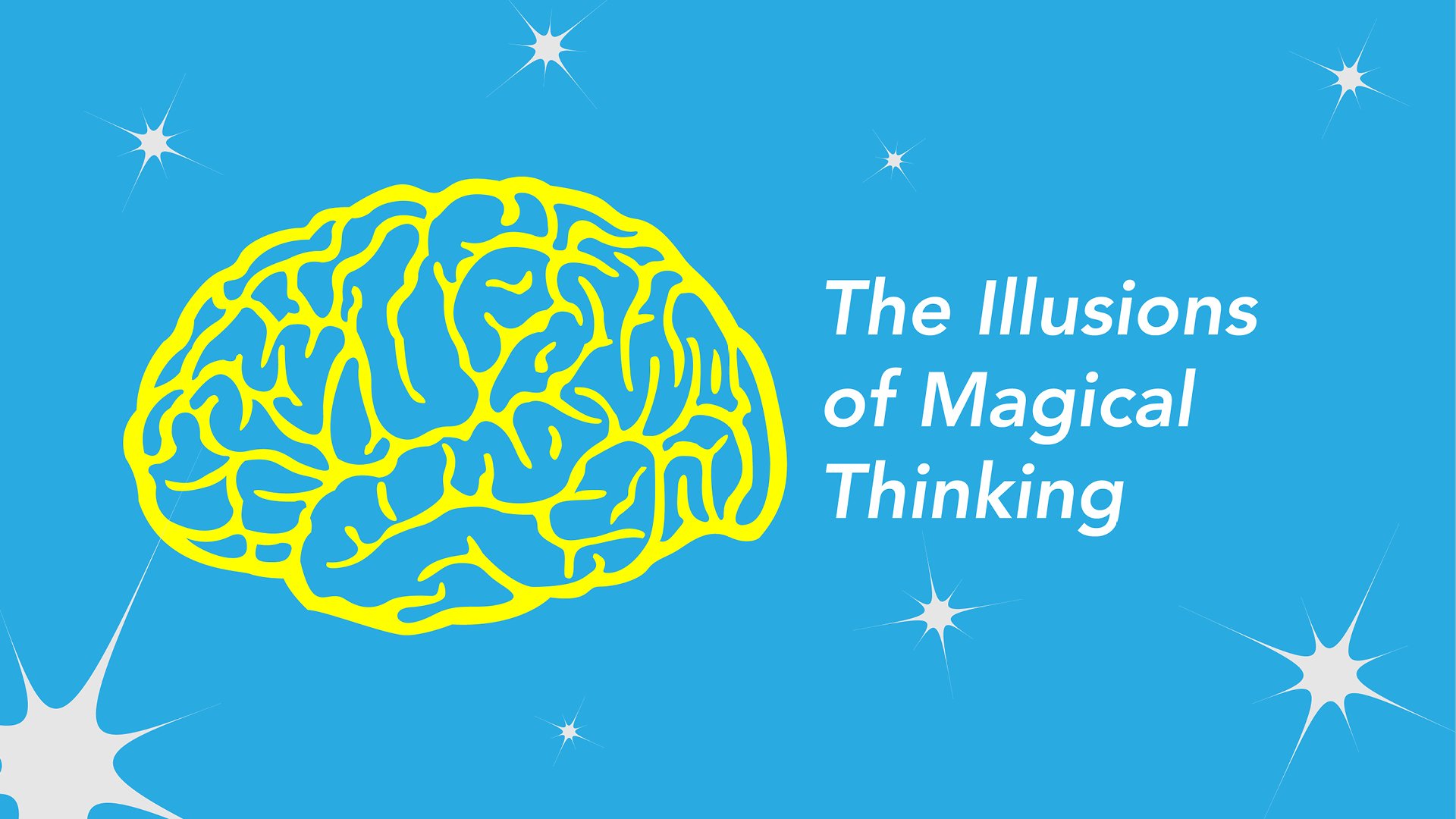 23 Jun The Illusion of Magical Thinking

Posted at 12:40h in Articles, Features by Loudspeaker 0 Comments

Contagious: The Pandemic Spread of Violence

A CLOSE UP OF MAGIC (THINKING)

For three summers when I was in middle school, I went to magic camp. I’m really fun at parties. Magic camp was hosted at Bryn Mawr College in Philadelphia. There were about 100 kids and we were broken into two categories: those who did stage magic and those who did close-up magic. The stage kids got all the girls…all three girls. So, naturally, I was a close-up kid. This is me… (Kazow!)

I got so good at magic I started believing I could influence things by thinking about them and I thought this was OKAY until I was playing with my sack one night… my empty, empty sack. And in it, I found a copy of Psychology Today of March 17, 2013 – which talks about magical thinking.

Magical thinking, as it defines it, is believing that one event happens as a result of another without a plausible link of causation. Essentially, we think that we can influence outcomes just by thinking about them – and it extends far beyond the antics of prepubescent magicians. In his 2011 book Collapse, Pulitzer Prize-winning author and scientist Jared Diamond contends that civilizations collapse when they fall over…and when they persist in obviously irrational behaviors, deny logical and casual reasoning and instead rely on irrational thought and magical thinking. So, using our brains, and some magic, we need to understand this phenomenon further. First, we’ll delve into the causes of magical thinking, then we can examine its negative effects, before finally, we’ll pull some solutions out of a hat…because that’s where I keep my things, not because of magic. It’s time to get real, people. Abracadabra! I don’t like that…w e’ll work on more original magic words as we go.

We can begin this grand act with the causes: we commit to magical thinking when reality contradicts our beliefs and second, magical thinking makes us feel falsely powerful (Obi Wan mind-trick thing:) you will like this article.

First, we’re not comfortable when reality contradicts our beliefs so we commit to magical thinking to return to that desired reality. Live Science of December 13, 2013 reports on a study conducted by the Pew Research Religion & Public Life Project: in the creationism-evolution debate, 33 percent of Americans believe there is no such thing as evolution, and 67 percent actually went to high school. Even in the face of overwhelming research that suggests otherwise, many simply refuse to accept that humans have, at least somewhat, naturally evolved. We magically think with politics, too. The Huffington Post of July 26, 2012 reported that 48 percent of people think President Obama could be Muslim! When we don’t like something or someone, we magically invent a problem with them (And, then it gets out of hand like this trick…).

E pluribus unum! No, too patriotic.

Second, magical thinking makes us feel falsely powerful. Psychology Today dubs the phenomenon “The Harry Potter Effect.” Essentially, when faced with a problem, we think we can simply wish or will it away… like Emma Watson’s boyfriend. The journal reports that research suggests not only do people believe in magic, it is hard-wired into our brains and can have some interesting consequences. When faced with big decisions, we believe that thinking alone can impact the outcome. Books like The Secret just perpetuate this thought. The Secret pushes the power of positive thinking. Its author, Rhonda Byrne, just wrote another book called Hero, which is basically the exact same book. I did some googling and let me tell you – Rhonda’s secret… nothing like Victoria’s secret.

You can hire me for you next birthday party or corporate event. I can use fun illusions to teach about the values of skepticism! These are illusions… tricks are for kids. I even have references. One woman, Cynthia, said I’m the best magician she’s ever raised!

THE EFFECTS OF MAGIC

We can now examine two effects that magical thinking is causing: an inability to identify legitimate problems and a decrease in how successful we are.

First, an inability to identify legitimate problems… like Wicans – they’re giving magic a bad name! Slate Magazine argues on October 3, 2013, that America needs to move past irrational threats from abroad. The government currently spends roughly one trillion dollars on defense and homeland security. Whoa! Risks are on the decline, but we continue to spend on allies and ourselves and ignore the problems this excess spending creates. The government is magically thinking on a large scale, but unfortunately they don’t make boxes…or saws…or women…that big. By 2040, the U.S. government should have seized the opportunity to save substantially through strategic investments in security and by moving past irrational threats. If we don’t cut spending, I’ll have to do this to save that trillion dollars.

Second, magical thinking lessens our chances of succeeding. Communication scholars Joshua Gunn and Dana Cloud argue in their article “Agentic Orientation as Magical Voluntarism,” a topic I think we were all curious about — that when we engage in magical thinking, we believe we have agency, when we’re actually giving up what little power we do have. The New Yorker on February 19, 2014 explains an experiment by social psychologists Gabriele Oettingen and Doris Mayer. The two studied German college students who were hoping to get jobs…like schnitzel van drivers or milk maidens…I don’t actually know what happens in Germany. Their studies found that those who strongly believed they would get jobs ultimately submitted fewer job applications and got worse jobs than those with realistic expectations, who ultimately received better jobs with higher paying salaries. Their studies also applied to things like succeeding with romantic crushes and recovering from major surgeries, both of which I succeed at weekly. Well, at least the surgery part.

Thankfully, solutions to this problem are easy and with some hard work… and a little magic…they can take flight!

Albert? This would have gone so much better earlier in the article.

We need to stop employing magical thinking. Thinking about it won’t magically fix your slow laptop. Focusing hard enough won’t make my pants any tighter. We also need to realistically decide whether something is legitimate, or just a product of magical thinking. You can check sites like PolitiFact, which discerns politician’s claims from fact or fiction. You can also read Skeptic Magazine, which is a nonprofit scientific and educational organization whose mission is to engage in investigating the paranormal, fringe science, pseudoscience, and extraordinary claims of all kinds, as well as promote critical thinking. Armed with these tools, visit library magic shows and political rallys across the country and expose those fakers! Ignore the cries of the children…and grown politicians — the tears will make them stronger.

Finally, none of us are going to get jobs and you will all die alone — unless you work hard for it. We do need to acknowledge reality for what it is and keep a level head. Put out more job applications, rather than less. If you have strong feelings for someone, tell them! Also, try to have backup plans, just in case. Learn to bartend or do close-up magic. Your parents will definitely be OKAY with your degree in journalism going toward magic. Above all else, think logically. Logic is very simple: here’s point A, here’s point B (e.g, two metal rings) — if you can’t see how they connect (the rings link), they probably don’t (the rings come apart). See…

THINK IN THE REAL, LEAVE MOST OF THE MAGIC TO THE MAGICIANS

Magic will always have a very special place in my life. And if it’s used in the right way, it can be very powerful and very sexy. However, today, we exposed magical thinking for what it actually is…not so magical. After examining the causes, effects and solutions, it’s clear you all need to hop off the broomstick and leave hocus pocus to me. Reece’s Pieces! There’s a good magic word.