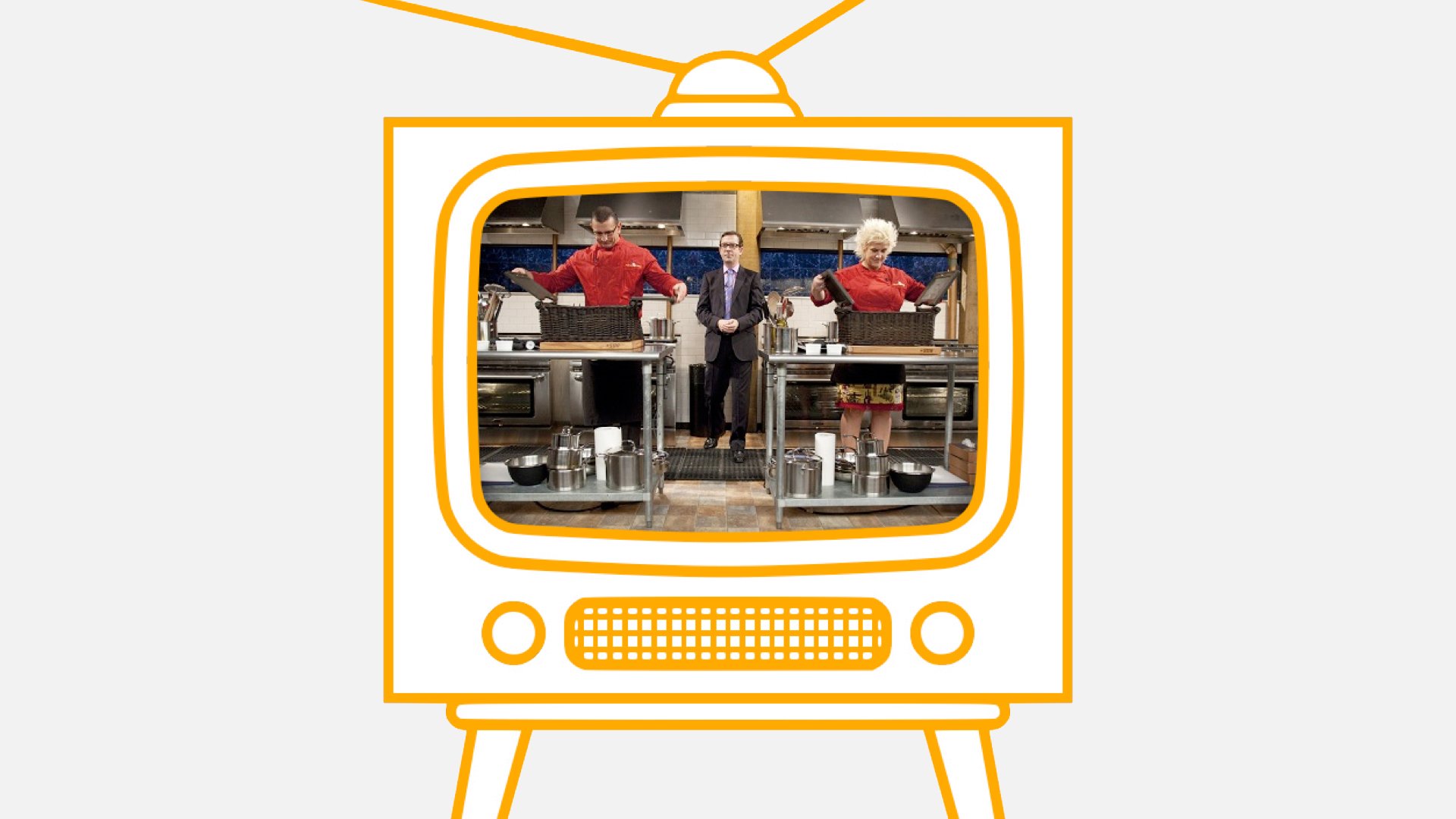 Posted at 16:53h in Articles, Features by Loudspeaker 0 Comments

When I was flipping through the TV channels the other day, I heard a commercial for “Unwrapped,” and my first thought was, “Well gosh… that hardly seems healthy. When people go unwrapped, you end up with other shows like ’16 and Pregnant!’” I dutifully tuned into Food Network that evening, but instead of witnessing a sextravaganza, I almost threw my Swanson chicken pot pie across the room! Seriously, who wants to look at 50 greasy White Castle burgers oozing all over a dirty skillet? Apparently, we do.

We are infatuated with cooking shows. In fact, Food Network is broadcasted in nearly 100 million American homes, according to their website, and on most nights, commands more viewers than any cable news channel. Our fingers are glued to our television remotes, most likely from the residue from our leftover t.v. dinners, since Americans are spending less time than ever in the kitchen. According to the August 2, 2009 Observer, Americans are devoting a mere 27 minutes in the entire day to food preparation, most likely on our most popular dinner: a sandwich and soda. The disparity between what we’re watching on TV and what we’re actually eating is leaving us with a startling truth: We’ve stepped out of the kitchen, and into a whole range of unhealthy cuisine. And this is not just a domestic issue; by handing over the ingredients to our diets, we’ve given up a certain amount of personal control. We need to throw this lack of cooking to the curb faster than last night’s House of Hunan leftovers.

So, to understand why we need to regain our cooking skills, we will delve into the problems, causes, and solutions of our disappearing cooks in order peel our buns off of the couch and slap them back into the kitchen.

Belly Up To The Problems

After its 1921 start with White Castle, fast-food has taken over American cooking; and they’re not just serving Harold and Kumar. Americans have given up the burger of the heart for the burger of the heart attack, and we will look at the problems this has created by first examining its impact on our culture, and second, our health.

Cooking is as essential to our culture as Snuggies are on the late-night van ride home after a tournament. Despite our social avoidance of the activity, cooking is simply hardwired into our cultural systems. According to anthropologist Richard Wrangham’s 2009 book, Catching Fire: How Cooking Made Us Human, cooking led to our evolution. Wrangham explains that we didn’t evolve because of “survival of the fittest,” but rather, because we began to cook. Yeah, uh huh – try telling that to my hungry cousins on Thanksgiving Day. Those serving forks really hurt! The June 3, 2009 Slate explains that cooked food allowed our stomachs to spend more energy on brain development and less on digestion. It also introduced social traits like trust and companionship. Trust – sure. Has anyone else tried to share spinach-artichoke dip with their teams after a tournament?? There’s hands flying everywhere! It’s like being married to Charlie Sheen! So, if we’re giving up an activity that was essential to our evolution, where does that leave us? That idea leaves a bad taste in my mouth. (smack smack) Hm. Needs more effort.

Cooking may have led to our evolution, but it is also linked to another integral aspect of our humanity: our health. A 2003 study led by Harvard economist David Cutler found that the obesity is linked to the decrease of home cooking, as obesity rates increased from 13 to 31 percent as fast food grew. And, the less we cook, the more we eat – since 1977, we’ve added approximately half a meal to our daily diet. News flash: Fast-food Mexican at 2 a.m. is not an “after dinner snack.” But we’re not just snacking on Big Macs; according to the May 27, 2009 New York Times, we’ve handed our skillets, and our potbellies, to a big white glove spewing Hamburger Helper, which, like our diets, is chock full of our favorite unhealthy ingredients: sugar, fat, and salt.

Out of the Frying Pan and Into The Fire

So, what’s the most popular vegetable in America today, other than marijuana? Bluntly put, it’s the French fry. We will next look at the causes behind America’s empty kitchens by examining our cooking obligations, and second, Americans’ number one excuse.

Somebody has to take responsibility for the abandonment of our kitchens. But guess who’s not? Us. We no longer see cooking as obligatory. It’s like when you re-heat that Macaroni Grill spaghetti from last night, and it explodes all over the microwave? You tell yourself that you don’t have to clean it up, because someone else will. As stated by the August 3, 2009 Examiner, it appears that the food industry is in charge of microwave deep cleaning, because we’re simply eating what they make. Unfortunately, their menu just happens to be chock-full of decomposing frogs, as found in the 2009 Diet Pepsi surprise. Whoops – not an ice cube! No, seriously, a man ate a decomposing frog. How did we get here? Well, we can also turn our gratitude to WWII, which allowed advances in mass-produced, pre-processed meals to enter the home kitchen. Great job, Hitler. Way to destroy more futures forever. Also in the 1950s, the microwave, another weapon of kitchen destruction led to the spread of ready-to-eat 30-second meals. Now even the simplest recipe, a peanut butter and jelly sandwich, can be bought pre-packaged, and crustless, all ready to slide into your child’s lunchbox. Now every day can be peanut-butter jelly time.

So, we’re not cooking, because we don’t have to. The only thing we are making? Excuses. According to the August 9, 2009 Daily Finance, Americans are claiming that they simply don’t have time to cook. In fact, we’ve added approximately 167 hours to our annual work schedules since 1967. And June Cleaver has found a new best friend: the Schwan’s man. According to the August 2, 2009 New York Times, both women with jobs and those without are spending less time cooking. Yet even though we don’t have the “time” to cook, we can still pencil in a date with some virtual food. The average length of a primetime Food Network show? 60 minutes. That’s double the amount of time we spend in the kitchen on an average day. But less than half the time we spend on Facebook growing our own crops in FarmVille and cooking them in Café World! Hm. Looks like our rumps have developed a case of Swine.

Like Chandler’s first date, our culinary trends have gone rancid. Unless we too want to end up like Chandler, with only TV guide and pork rinds to keep us company, we must look at two personal solutions to our cooking crisis.

Step one to solving America’s cooking crisis: Don’t be a pre-packaged consumer. Start by raising your awareness of America’s favorite cooking channel. The April 14, 2009 New York Times points out during its prime time hours, Food Network programs turn cooking into a spectator sport, which does nothing to bring us closer to our own chopping blocks. And Food Network’s advertisers? Ore-Ida frozen French fries, which is not All-righta. Also, be aware of how this our cooking crisis is affecting today’s youth – budget cuts in schools often trim the fat from electives, such as Family and Consumer Science, according to August 26, 2009 Daily Advance. Without these courses, students may grow up with no idea how to tell a paring knife from an Uzi. Check out your local schools; don’t let home cooked meals die with this generation.

Next, on a personal level, find your inner Julia Child. I’m not saying cook everything from scratch, but try to find time to put on a chef’s hat once in a while. Cooking can be more than the means to a meal; it can be a means to happiness. According to the June 18, 2009 Western Mail, savoring good food that you created increases happiness and wellbeing. If you’re intimidated, don’t be. Everyone makes mistakes in the kitchen – even guru Gordon Ramsey. As Julia Child said, “The grand thing about cooking is you can eat your mistakes.” Try simple recipes – while Food Network prime time might not boost your cooking education, its online version provides recipes for all types of cooks, from culinary experts to the culinary clueless. So go out, grab a sauce pan, and try stirring up some macaroni and cheese – without the box.

As Michael Pollan points out, Julia Child took the fear out of cooking. Now, food corporations have given us another dangerous emotional weapon: laziness. By looking at the problems, causes, and solutions behind America’s cooking abandonment, we have seen that it’s time to bring the passion back to our plates.