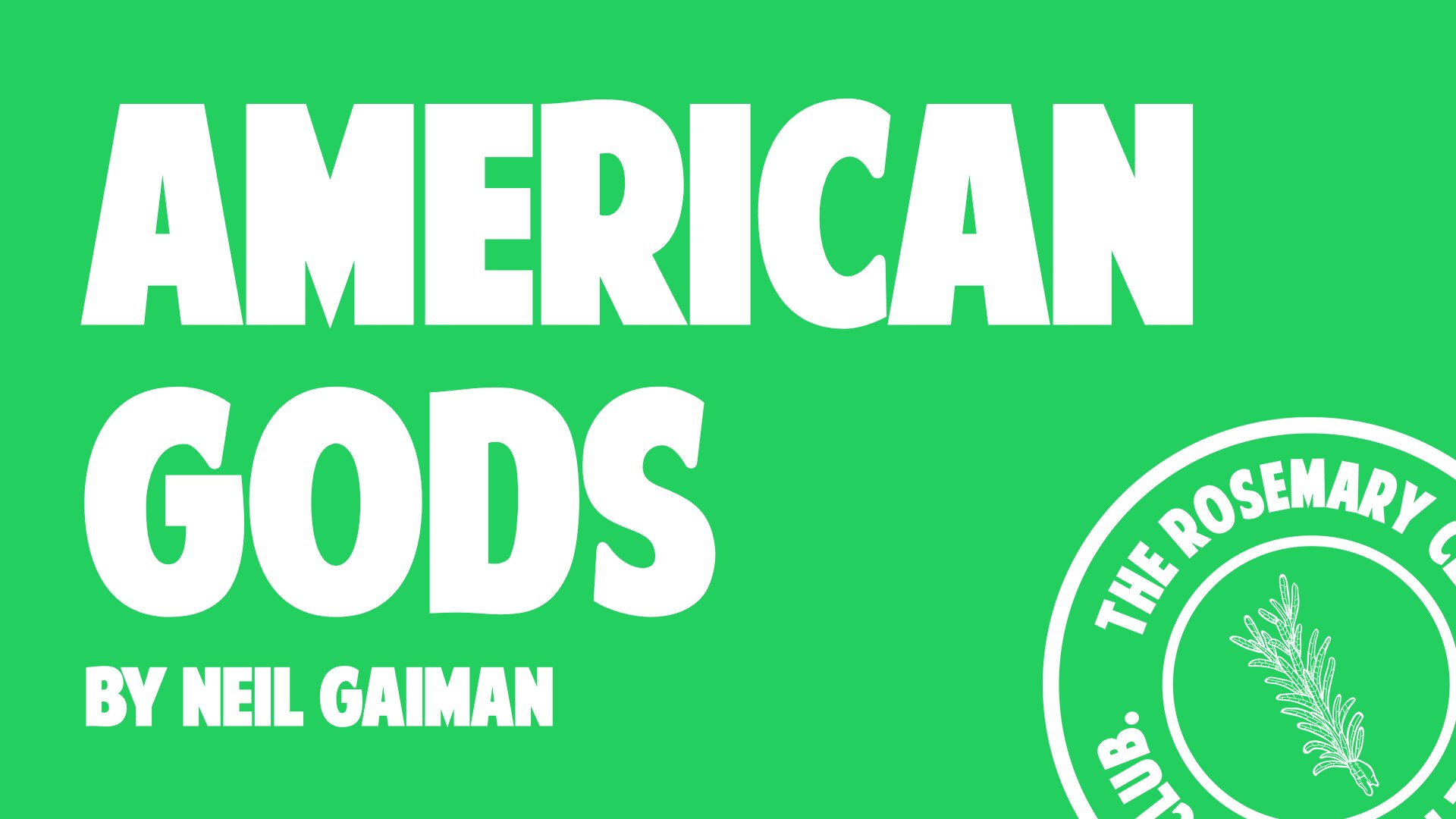 “What is a book you think the public NEEDS to read?”

That is a deceptively difficult question. As a bibliophile and someone that has survived the jungle of graduate school, singling out ONE book that I think the public should read is hard. Like, really hard. I think people should read more than one book because, just like all graduate school papers, everything is nuanced. But, also like graduate school, things don’t always work out how you would like them to.

However, after much consideration, the book I think the public NEEDS to read is American Gods by Neil Gaiman. I don’t want to give too much away, but the basic premise that underlies the novel is that gods and mythological creatures exist in the world because people believe in them. Thus, when immigrants traveled to America, forms of these gods and creatures manifested here, but they are no longer as powerful as they once were due to dwindling belief. However, within America, New Gods have arisen, such as Technology, Media, even Lucille Ball, and are at war with the Old Gods for dominance. This thick novel follows a former bouncer and ex-con named Shadow, who upon getting out of jail discovers that his wife and best friend are killed in a car accident. His life now adrift, he is then employed as a bodyguard by a mysterious con-man named Mr. Wednesday. They travel across the country together, meeting with Mr. Wednesday’s odd and unusual acquaintances. Shadow then discovers that Mr. Wednesday is, in fact, a reincarnation of the Nordic All-Father Odin. His odd acquaintances? They are also other Old Gods who Odin is trying to recruit to fight in an epic battle against these new American gods. Slowly but surely, Shadow is thrown into this mythological underworld with its own rules and regulations, and must discover and untangle the twisted truth behind both the Old and the New.

For me, American Gods is one of those books that keeps on giving. Not only is the story wildly entertaining on its own, but once you start to explore its depths, you find that Gaiman has constructed a poignant, deep, and thought-provoking narrative that is relevant to all who read it. By taking our obsession with celebrities, our want for technology, the licentiousness in our media, and many other themes, and manifesting them into living breathing gods, Gaiman is creating an interesting lens with which to view our American culture. Think about it: we obsess over phones, our plasma TVs, the shows we watch – and we also judge others if they do not have what we have. We have literally elevated the iPhone to god-like status through our own form of reverence and worship. Having these foci anthropomorphized presents a sharp critique of our consumerist culture. Additionally, the Old Gods are Odin, Anansi, Anubis – gods of lore that embody legend and power. Contrast this with the gods Americans create and worship – what does that say about what we as Americans find important?

Here’s a question, though: how can a British author write a book about American gods? It would be easy to dismiss Gaiman’s critique since he is an “outsider.” Yet, I think Gaiman’s outside perspective actually bolsters his critique – and gives a salient lesson that Americans all too often forget: the Old Gods demonstrate that, indeed, we are all immigrants. While some of our ancestors made that trip across the pond or border a lot more recently than others, we can never forget that we all came from somewhere else, and are supposed to be welcoming of the tired, hungry, and poor. Under that criteria, Gaiman, a British man who has been living in Boston, has every right to write about American culture as any other American. To use his foreign origins as a reason to dismiss his critique only bolsters his message and emphasizes how closed-minded we have become to the culture we have created.

Additionally, in order to really understand the intricate beauty of American Gods, readers must do a little research of the Old Gods Shadow meets. For example, someone who has never studied ancient Egyptian mythology will not appreciate that Anubis (otherwise known as Mr. Jaquel) owns a funeral parlor in Cairo, Illinois. Or even that Mr. Wednesday’s name derives from Odin’s Woden’s day. Many gods from pagan religions, and from religions that exist today, had somehow found their way to America. With America becoming more religiously diverse, it is no longer enough to be religiously tolerant – we must become religiously literate. Wouldn’t it be great that someone began to research other religions or cultures not because they saw in the news that someone was killed over it, but rather because they liked a character in a book?

Thus, American Gods becomes a tool to not only expose the dark underbelly of our American culture, but could also be used to start changing it for the better. While it is a thick novel, the lessons it provides speaks volumes more.

Becky Suhr was born and raised in Chicago, Illinois. She attended Bradley University and received her BA in History and Religious Studies. After taking a gap year to travel, she received her MA from the University of Chicago. As a bibliophile, world traveller, and active in the speech community, Becky strives to help others find their voice and have the courage to develop their own ideas.