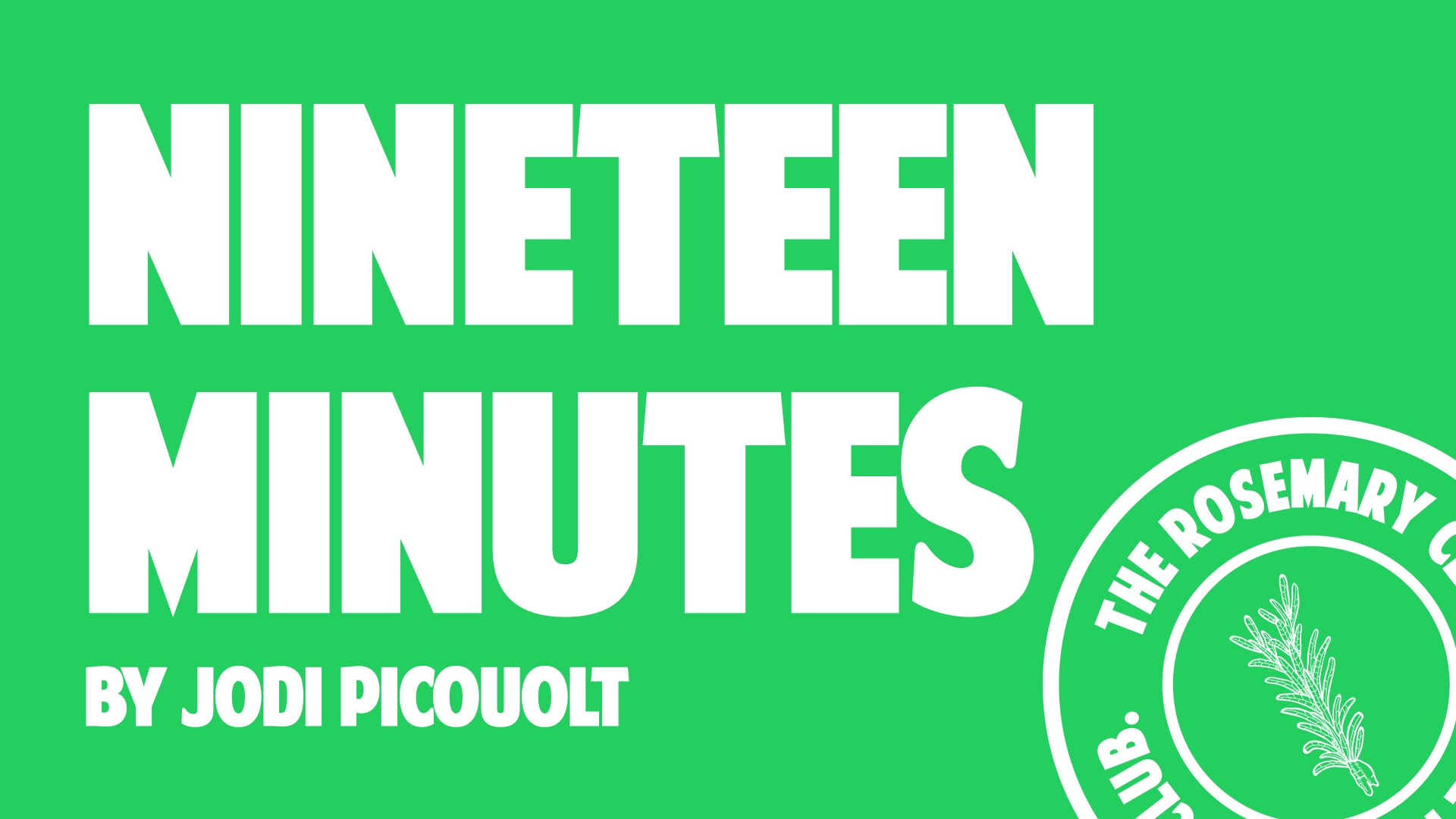 Posted at 17:38h in Books, Features, Rosemary Book Club by Rosemary Cauley 0 Comments
Nineteen Minute by Jodie Picouolt
Nineteen minutes. That’s all it took for Peter Houghton to ruin his life, his family’s life, and the lives of students he shot at his middle class high school one fateful day. Author Jodi Picouolt weaves Peter’s story with that of Josie Cormier’s, who was a childhood friend.

This wasn’t an inner city, impoverished student being raised by a single welfare parent. No. Some could consider it much worse. Peter seemingly had it all. Two parents, both professionals with good reputations in the community. Lewis, a college professor, specializing in happiness statistics and Lacy, a midwife.

It takes a village. That’s what experts advise is needed to raise and support a child especially through the troublesome adolescent years. Ideally, Peter should have thrived. So, what went wrong and where? Surely, one incident stands out. On his first day of kindergarten, armed with his shiny new lunch pail, he boarded the bus with his older brother. And then the bullying began. Students and friends of Peters’ older brother, took that shiny new lunch pail and threw it out the bus window. Not just once, but every time his mother replaced it, until she quit and used plain brown sacks. And the
bullying continued day after day. Peter quickly learned he would receive no help from Joey or his mother, and certainly not his absent minded father. Family strike one.

There were a few scattered moments of normalcy. In those early elementary years, Peter found solace in Josie, daughter of his mothers’ friend, Alex, who was a judge in an idyllic north eastern town bordering Vermont. But the relationship failed. Josie deserted Peter. Social Group strike two.

Bullying continued in a variety of ways only children know how to dish out. With physical abuse, scars would have surfaced. Peter however, hid and repressed his scars internalizing them until finally reaching his breaking point. It came as a planned incident in the cafeteria. So humiliating, it was the talk of the school community for days. Administrators, teachers, lunch aids, even custodians did nothing. So, Peter planned revenge and he did it well. School community strike three.

In the Animal kingdom, experts have seen evidence of the “pecking order” behavior. Peter was a victim of that pecking order. From someone somewhere Peter should have found support. He did not.

What if one person had not given up on Peter? Could anyone have prevented all this from happening? Is it possible that the community of academic educators or the community of ordinary people, with all of our God given gifts, cannot find a way of rising above basic animal instincts. It took a village to destroy Peter Houghton.

Rosemary Cauley was born and raised in Wichita Kansas. She graduated from Wichita State University with a BS in Education and Masters in Education. Always a lover of books from childhood, her passion, as a Media Specialist in Wichita Public Schools, was to share the power of books. She implemented numerous incentive programs to develop an awareness of various authors, genre and culture. All geared to assist students to become lifelong readers. Rosemary, the person the book club is named after, is this month's book sharer.